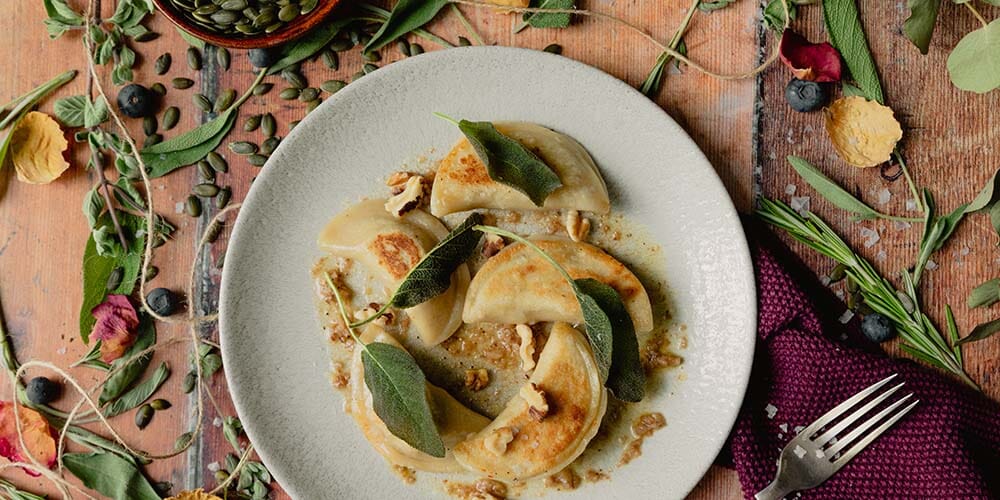 Pierogi are to Polish people what a Sunday roast is to Brits: a staple dish so dear to us that it’s part of who we are. Commonly filled with potato, onion, and white cheese (pierogi ruskie), sauerkraut, or minced meat, pierogi are small, half-moon shaped dumplings made with a simple dough of flour, eggs, water, and salt.

You can eat them soft, like giant agnoletti, after boiling in salted water, or brown them in the pan with some butter after boiling if you like them golden and crispy. Many people like to add some bacon or onions into the pan at this point, and pour this over the top before serving — my grandma certainly did.

Pierogi have been sold from the streets of London since at least the 1940s, and with an estimated 150,000 Poles living in London today, there are no signs of this letting up anytime soon. And that’s precisely why Kindred’s Head Chef Romulo Silva has reimagined traditional pierogi as part of Kindred’s signature London Fusion menu concept. 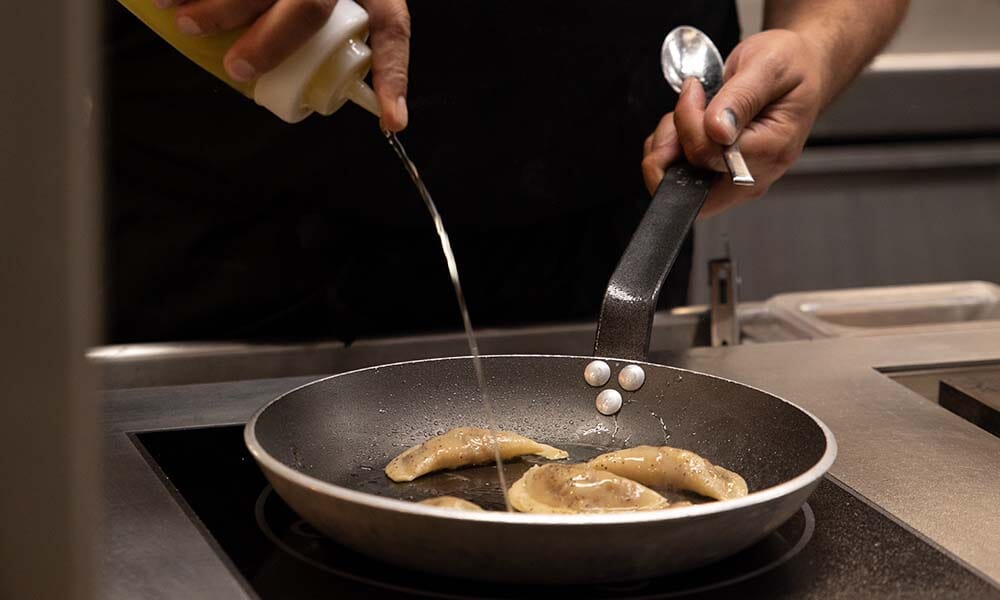 How many of us ask for curry sauce alongside our chips or pick up a kebab after a night out? Migration has hugely shaped food culture here in the UK, and Poles have been migrating here since at least the 16th century — most significantly during the Second World War and in 2004, when the UK joined the EU. After English, Polish is the second most spoken language in England, and the third most spoken in the UK after English and Welsh.

While Polish cuisine is yet to reach the high-street status of the kebab, there are plenty of brilliant Polish restaurants across London, and plenty more Polish specialty shops in neighbourhoods with sizeable Polish communities. Most of those neighbourhoods are in West London, with Ealing currently host to the largest concentration of Poles in the capital. Hammersmith also has a significant Polish population. 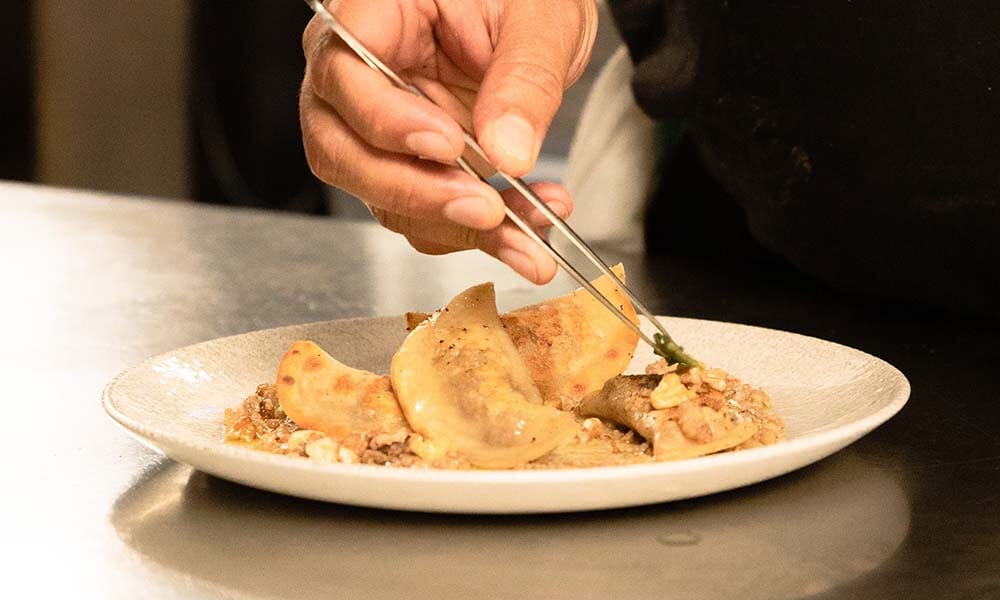 Daquise, the oldest Polish restaurant in London, has been serving pierogi in South Kensington since 1947. The menu today is still serving up the classics: cheese, potato and onion (ruskie); cabbage and porcini, and meat, plus the slightly more modern option of wild boar.

Pierogi are sacred among Poles, and for this reason, they are mostly still served with traditional fillings. However, there are a few brave souls in London giving the humble pierog (pierogi is the plural) a modern twist. Kindred’s Head Chef, Romulo Silva, is one of them. His pierogi are filled with butternut squash and walnut, served with a walnut vinaigrette.

“I chose this filling because it was controversial amongst the ‘hardcore’ pierogi fans,” he says. “Also, I hadn’t had a vegan version of pierogi before.” I can second that: I grew up in a big Polish family and have been eating pierogi my whole life, and am yet to encounter a vegan-friendly version. For the most part, Polish cuisine is decidedly un-vegetarian — and vegans usually don’t even have a chance. 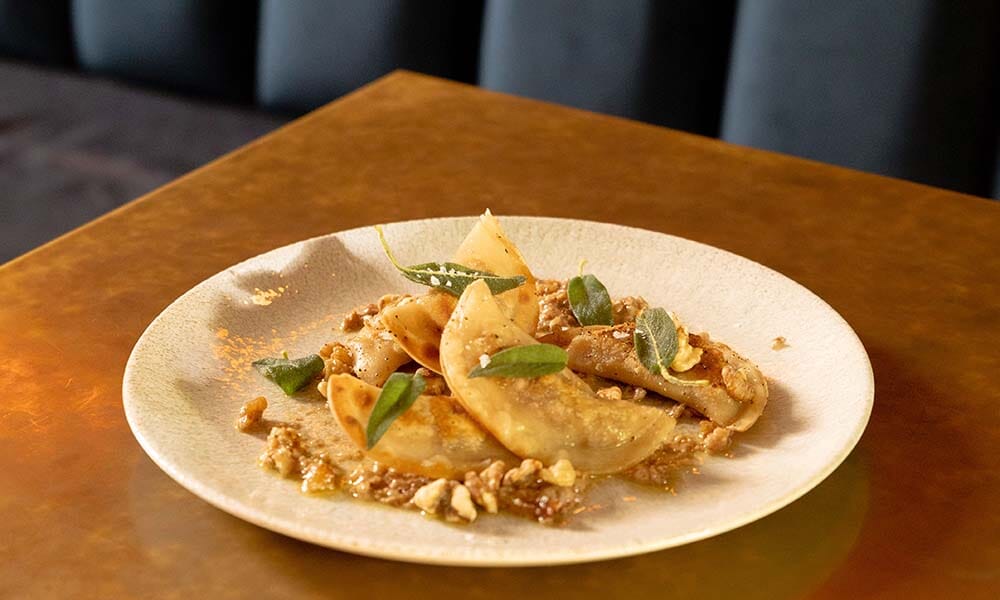 While adapting classics to widen their appeal inevitably ruffles feathers, it can be an important way to keep dishes relevant and to encourage innovation. Rather than ‘replacing’ a traditional dish, a reinvention can be an expression of reverence and affection, offering a creative and personal interpretation of a meal that’s meaningful to you.

“I have a strong connection with the Polish culture at home and at work, so when we were re-thinking the menu, I wanted to somehow incorporate some of that connection on a dish,” says Romulo.

One thing that will never change where it comes to pierogi, however, is the importance of getting the dough right. Like making bread or pasta, there is an amount of elasticity the dough needs to have, and it must be managed at the right temperature before rolling.

“It can be a bit tricky if you have not tried to make pasta before,” says Romulo. “The dough needs to be kneaded just until it is elastic enough to roll, and then chilled for about 20 minutes before you roll it. You don’t really want it to be too thick, but if it gets too thin, it can be a bit of a pain to stuff and fold.”

Pierogi are a humble food, meant to nourish and comfort. If trendy Londoners will pay £7 for a gourmet cheese toastie, it’s beyond me why pierogi — warming, hearty pockets of joy — aren’t flying out of street food stalls across the capital. They are ostensibly a Polish dish, but a part of London, too — and we’re pleased to celebrate that on our menu.