Inside the anti-racist history of Carnival 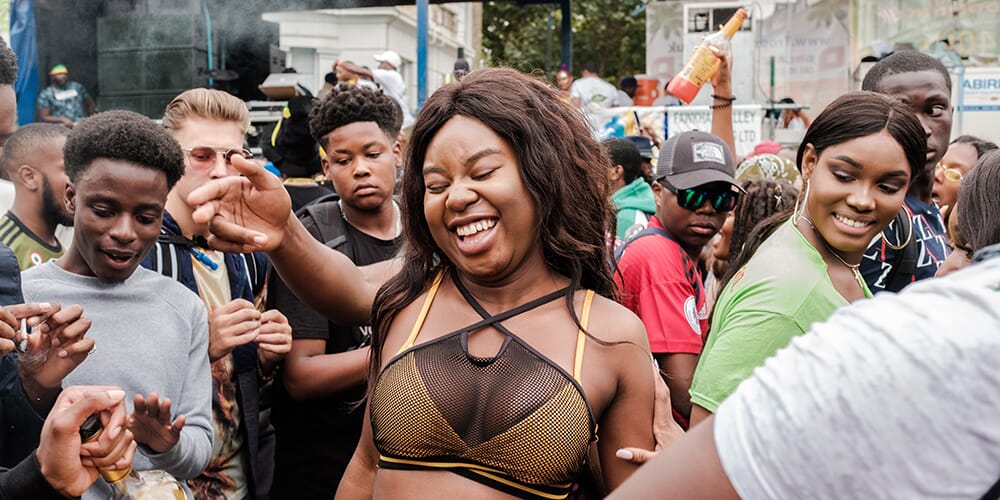 Many of us know Notting Hill Carnival as a colourful, loud, and perhaps boozy affair. The annual street festival is a staple of our city’s social calendar, but how many of us are aware of its anti-racist, anti-colonial origins?

Originally called the Caribbean Carnival, the event was created by Trinidadian activist Claudia Jones following a series of racially motivated attacks on the West Indian community in Notting Hill.

The festival came to become a celebration of Caribbean culture, and today is a joyful coming-together for Londoners from all walks of life.

On August 20th 1958, a number of West Indian homes in the Notting Hill area were vandalised by a large group of white men, known as ‘Teds’ — a movement inspired by the rebellious spirit of 1950s rock n roll that, among some, translated into animosity towards People of Colour. Many residents were assaulted during the attack, including Majbritt Morrison, a white Swedish woman married to a Jamaican man.

This is considered by many to be the catalyst for the Notting Hill riots, and spurred escalating acts of violence until the riots themselves began ten days later.

The attack came amidst open hostility to a new wave of Caribbean immigrants following World War II — particularly from white working class residents, who were further encouraged by the racist messaging of right-wing political groups. For one, fascist leader Oswald Mosley was known for the infamous slogan: “Keep Britain White”.

On August 30th, a reported crowd of 400 white people launched attacks on the Caribbean population, throwing petrol bombs and milk bottles and even using butcher’s knives and iron bars as weapons. The Black community fought back, and the rioting lasted for five nights.

In 2002, the Guardian reported that police reports of the riots attempted to deny the racial nature of the violence. In an official report, Detective Sergeant M Walters of the Notting Hill police said: “Whereas there certainly was some ill feeling between white and coloured residents in this area, it is abundantly clear much of the trouble was caused by ruffians, both coloured and white, who seized on this opportunity to indulge in hooliganism.”

It is thanks to police witness statements and statistics shared by others that the true story was known — and it’s important for us to remember this history as we dance with our friends to the beat of steelpan drums.

According to historian Fiona Compton, the origins of Carnival go way back to the 17th Century, when enslaved Africans held their own festivities while their European colonisers celebrated Lent with masquerade balls. This was an act of rebellion, Compton told BBC News. “They would observe, mimic, and incorporate their own African masteries, music, costume making and so on; a ridicule of their oppressors.”

Claudia Jones held London’s first Caribbean Carnival in January 1959, to “wash the taste of Notting Hill out of our mouths”, according to her colleague Donald Hinds. Held inside St Pancras Town Hall and reported to have around 50 attendees, Carnival was a way for Jones’ community to heal and come together. The festival was celebrated annually, mainly by West Indians, until Jones’ death in 1964.

In 1966, the event began shaping into the festival we recognise today, adopting the moniker Notting Hill Fayre and run by community activist Rhaune Laslett. The week-long festival was a celebration of the neighbourhood’s cultural diversity, and famously ended with a parade.

As the event grew in popularity, Laslett handed over the reins to the city, and the Fayre became Notting Hill Carnival.

“Notting Hill Carnival… is not the equivalent of O2 Wireless, or Lovebox,” journalist Kuba Shand-Baptiste wrote in the Independent. “It is not a generic festival, there to give everyone a chance to enjoy whatever their favourite genre of music happens to be…It is a street party, first and foremost, dedicated to celebrating Caribbean culture in all its forms and resistance against racism and brutality.”

In her piece, Shand-Baptiste critiques the 2019 Carnival, in which she noticed a degree of departure from Caribbean music to make way for techno, trap, house, and gospel — along with an increased presence of brands such as Red Bull facilitating ‘VIP’ experiences.

“When it’s harder for me to hear Soca than it is for me to brush past white people with dreadlocks…it’s clear something has to change,” she writes. Soca is Trinidadian music that fuses calypso with Caribbean rhythms.

When visiting Notting Hill Carnival, enjoy it as it was intended — a celebration of African-Caribbean culture. For those of us outside of that culture, remember to treat the house we’re visiting in the way we’d like ours to be treated.