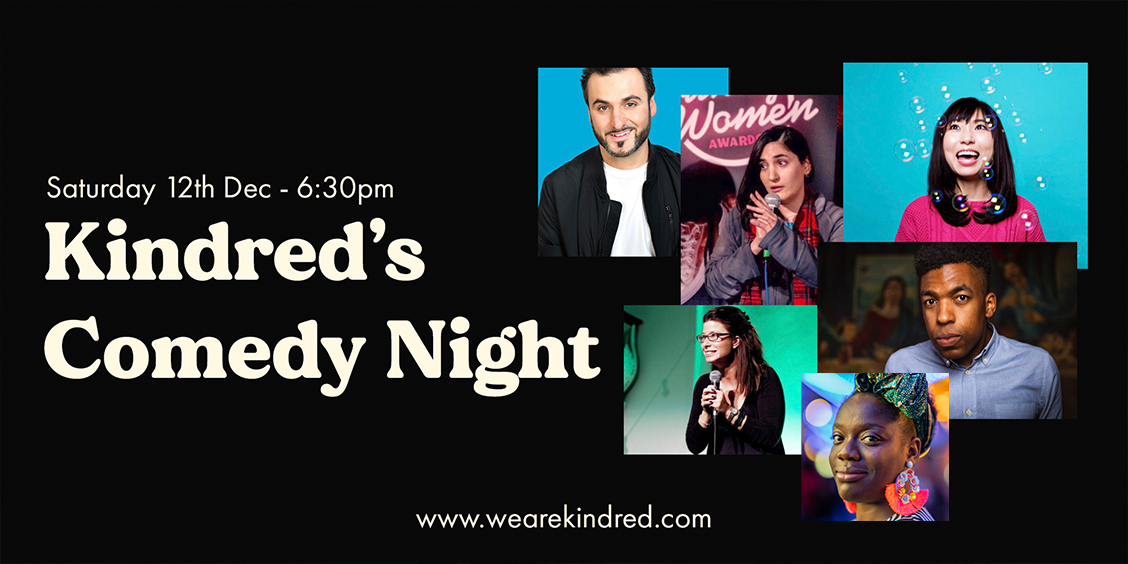 We felt like it’s time for a good time. If you need to make plans for a night out once we’re back open, look no further!

We have an amazing lineup of comedians ready to give you the LOL of the year. To be in on the joke, find some pals, book your tickets, and enjoy your night.

The Comedy will start approx. 7:20pm.

Who’s on the line-up?

Irish Iranian stand up comedian, born in Iran, raised in the North east of England. Tours annually across the UK and the world, including Australia, Dubai, New York, France, Germany and Switzerland along with 15 years at the Edinburgh festival.
And appeared on numerous tv shows on BBC1 & 2, ITV1 & 2, C4 & C5.

Yuriko Kotani is a UK-based Japanese comedian, who began performing stand-up in 2014. She was named as ‘one to watch’ by Time Out and won the BBC New Comedy Award in 2015. Yuriko appeared on Russell Howard’s Stand Up Central, in BBC Three’s Pls Like, CBBC’s The Dog Ate My Homework, Channel 4’s Big Juice and Paul Hollywood Eats Japan.

Fiona has funny bones and an easy warmth on stage.  She has actual gags, an increasingly rare commodity in today’s wispy, live blogging forum of comedy.  She knows about delivering the funny stuff not commenting on it or talking about gigs she’s had, but life experience made recognisably hilarious.” – Julia Chamberlain (So You Think You’re Funny Awards)

Toussaint Douglass is one of comedy’s most exciting and talked about new names and is already making serious waves across the industry. His innovative brand of stand up mixes the personal with the political, whilst adding a uniquely absurdist slant to brilliant comic effect.

In 2018 he burst onto the circuit gigging at top venues such as The Comedy Store, Top Secret Comedy Club, Banana Cabaret, Backyard Comedy Club, The Glee Clubs, Frog & Bucket, Komedia Brighton & Up The Creek and achieved rave reviews for his outstanding performances at several major UK comedy competitions.

To ensure we can run this event as safe as possible, and in line with the Rule of 6, please book your table below. Please only book with your household/ people in your support bubble, in line with tier two regulations. Please note, tickets are non-refundable and we may not be able to exchange table sizes depending on the availability on the day.

Please note, like other hospitality venues, we will only be able to serve alcohol with substantial meals. This is explained more in the government guidelines: https://www.gov.uk/guidance/local-restriction-tiers-what-you-need-to-know

If members would like to attend on their own, please email Anna at bookings@wearekindred.com and she will be able to assist with accommodating.

If your group size is unavailable to purchase please email bookings@wearekindred.com as we may be able to assist.

Doors open at 7 PM, come and get comfy.

Tickets are available below:

1.Amendments to your booking
Should the government enforce a period of lockdown or change in event restrictions on or before the event date, The Hirer will be entitled to postpone the event of up to 12 months with all payments being carried forward to such an agreeable date. The Company will work with The Hirer in order to reschedule the event and find a suitable date for the postponed booking with no penalties.

2. Cancelling your booking
If the Hirer chooses to cancel their booking with at least 10 days notice, our usual cancellation fees will not apply and The Company will issue a full refund minus a £125 admin fee.

3. Guidelines and Waiver
In the case of any viruses declared a pandemic by The World Health Organisation, Kindred Hospitality Ltd adheres to comply with the guidelines set by the government.

In consideration of my participation in the foregoing, I acknowledge and agree to the following:

Following the pronouncements above I hereby declare the following:

I am fully and personally responsible for my own safety and actions during my participation and I recognise that I may be in any case at risk of contracting a virus. With full knowledge of the risks involved, I hereby release, waive, discharge Kindred Hospitality Ltd and it's employees from any and all liabilities, claims, demands and causes of action whatsoever, directly or indirectly arising out of or related to any loss, damage, injury, or death, that may be sustained by me related to any virus while participating in any activity while in, on, or around the premises or while using the facilities that may lead to unintentional exposure or harm due to any virus or communicable disease.

I agree to abide by the Kindred Hospitality Ltd rules to ensure compliance with social distancing measures and health and safety guidance given by its employees, including compliance with staggered entry and exit procedures to prevent crowding in the venue. Furthermore, if I am hiring any part of the venue, whether a room or table area, for a private booking, I take full responsibility for the wellbeing of my guests as well as ensuring I have their contact details.

If a member of your party becomes unwell due to intoxication, they will be asked to leave with a member of choice from the same group. The company will not be responsible for managing any persons under these circumstances.

By signing below, I acknowledge that I have read the foregoing Liability Release Waiver and understand its contents; that I am at least eighteen (18) years old and fully competent to give my consent; that I have been sufficiently informed of the risks involved and give my voluntary consent in signing it as my own free act and deed with full intention to be bound by the same, and free from any inducement or representation.